One thing that isn’t always considered when delving into the complexities of the psychological impact of our ‘mental game’ on the way we play, is how we balance the emotions that we feel; the ups and downs, especially within a game where the ability to do so is pretty important and essential to our chances of a comeback say and ‘keeping our team in it’. But these things can and will impact our game if we let them, and it’s important to recognise this when playing in between the posts. Whereas our team mates might feel the highs of a goal scored or the lows and disgruntlement of a goal being allowed, our position and the way we deal with the stresses and pressure of the role is a hard task, with ‘our backs up against the wall’ and ‘up against it’ as they say. Our temperament needs to be more lucid and calm, able to withstand the hardships of a goalkeeper and the things that ‘do our head in’, enough to play to our best. In order to perform to our optimum best, we goalies need to focus on keeping our emotions in check, sufficiently capable of managing things internally to get through the game with our sanity intact!

Emotions. Emotions, they are something tricky and befuddling to deal with. Apparently according to some people, we are spiritual beings living out human lives, or is it the other way round?! Yes, those things labelled emotions, that we experience every second, hour and day of our lives! And as goalkeepers we are going to experience them just as much! They are varied and confusing and yet can have a derisive impact on our game if we fail to interact with them properly and get over them.

Forms of emotions are myriad, but the ones that affect us most as goalkeepers that I can think of are below:

Although not particularly impactful towards our game, adrenaline does present something interesting; if we get a rush, then however small, it can bring in a boost of confidence or get us feeling a little hyper or overactive when it isn’t needed. An adrenaline rush can often boost our confidence a little, as we face the dangers of those outfielders and their powerful shots. Where we slide out to block after a rebound, or go in for a tackle and there’s a danger of being hit (especially if you’re ‘padding down’, however reduced!) or make an acrobatic save, which you realise is top drawer and a highlight reel one, then you may end up a little ‘geed up’ as a result! Our blood gets pumping and we feel invincible, or at least start to. Obviously you want to not get too caught up in the rush, especially if you give up a goal and it significantly dampens your spirits! Really, it’s a case of riding things and not getting too caught up in the moment, although it does seem to be useful to motivate us to charge down rebounds, attack a clearance, intercept a crucial pass etc.!

Competitiveness can blur into frustration occasionally, if we are competing in an especially important game for table positioning or playing against a top of the league team or maybe even one that is regarded as playing aggressively and chirpy themselves or perhaps a little cheating! It’s easy to get frustrated as a goalkeeper, especially if you’re arguably playing a blinder and being the man of the match for your team and yet they’re not doing their part by not scoring or helping you out! Or you have a potential reason to be getting annoyed and having emotions build up negatively, like somebody purposefully trying to injure you maybe, or standing in front of you to block your vision and saying things to ‘get under your skin’ etc.

You need to ignore it, I guess and just focus on playing your game in between the posts. No, it’s in no way easy, but if you let them get to you and beat you, then they’ve won. Like the school bullies in some weird analogy. And we have to be ‘the bigger man’ (or woman) and bigger goalkeeper. Otherwise this sort of thing can happen! We can lash out on goal, ourselves (maybe, I’ve heard of outfield players that don’t wear shin pads and smack their stick on them after an error, ouch!) or maybe others.

And for a hockey related outburst, you can always take the example of ‘post bangers’. Here’s Chris Bristow (with Surbiton) obviously a little annoyed at having conceded against Southgate. There are a few goalkeepers around the leagues that will bang their post in frustration to vent (poor goal!)! It’s not a significantly big deal and shows our passion for winning, although I do worry for paint chipping/stick damage, I’m just trying to make light of things and sound engaging! I for one would drop kick my gloves after a bad game where my shot stopping made no difference to the score line, so I’m no different, there you have it! 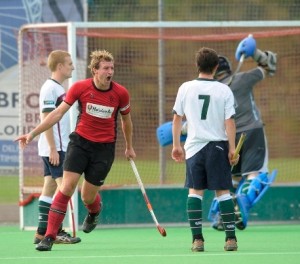 Not sure who this photo belongs to (for accreditation) so apologies for copyright etc.

But, there is also the potentiality for things ‘getting out of hand’. You hear it in other sports like football, or the goalies in ice hockey where they’ll chop at people’s legs, shoulder check a guy coming through (yes, even goalies can ‘hit’ in ice hockey, need to find a video example!) or take a shot with their stick in between the legs of whoever got too close. Billy Smith and Ed Belfour were true examples of guys that didn’t like you in the crease! In all seriousness, there is the danger of becoming a danger. I always worry about the moral implications of slide tackles, especially when you see or hear of forwards getting flipped over. A friend broke his collar bone being upended in a football match, so there is seriousness behind things. I’m not saying tackling is an ugly business, but it’s how you do it and why you do it, especially if there may not be a reason to.

But keeping aggression and angst in check as a goalkeeper is kind of important. You may feel the need to make things right and even want to take vengeance on a player or members of the team you are playing against for some slight or something. Say if someone injured one of your team mates or you were being pushed around or wacked at. I’ve been physically knocked over and bundled over running out for a ball and play carried on = confidence ruined! You may be more prepared to let your feelings take over your actions, making rash challenges and being overly aggressively than need be, thus ending up conceding more than we should have: out of silly costly errors that came from our feelings about things. This sounds a lot like a little random drivel, but I honestly do hope it makes a some amount of sense!

We all get nervous, to some degree. Nerves are good when mixed with confidence; a lethal cocktail because the nerves keep us in check, whilst mixing with the confidence when we realise we are good enough to play at a certain level, or similar. In exams if I knew I was going to do well, I normally would (they were the parts of my degree I got most of my firsts!). And when I played with apprehension or mistrust of myself or worry, I played well and showed my talent. But it’s not always like that and everyone interacts with it differently. Set routines or kitting up a certain way, and similar may help, along with a good warm-up and things like that. But really, ultimately, you can’t really let them get to your. Hold your head up, believe in yourself and go out there and enjoy yourself; it’s a game, we play it because we enjoy it!

On the flip side, you can be a little too pleased with yourself and a bit borderline cocky, which can hinder you because you forget the ‘bread and better’ saves of goalkeeping or expect to get a clean sheet without having to earn it! Perhaps!! This is important when it comes to matches, especially if playing against a lower placed team perhaps and expect a walkover, except it turns out differently and they give you a run for your money (even though it’s an ‘amateur’ sport, you get the idea!). If we honestly feel like a demigod or totally unbeatable and we play like we aren’t and ‘don’t show up at the races’, then it’s not going to make us look too good and will probably knock our self impression and ego down a peg or two! Imagine the upset of an underdog upset when you’re not the underdog! Confidence is essential, but being realistic about it and not ‘letting things get to your head’ after comments, commendations and team appreciation etc. is just as important. Confident yes, egotistical no!

Again, doubt is another negative impact that can have a big and potentially catastrophic impact on our performances as goalkeepers. If we doubt ourselves, then we’ll struggle to make saves and our decision making will be poor as we second guess or over analyse and over think and never commit to a decision that may have been the right one! Playing a stronger team or moving up a level in hockey, we may begin to doubt how good we are. But, beating ourselves up about things isn’t going to help either really. So, remind yourself how good you really are, remember that you are good otherwise your team wouldn’t have chosen you and play like you are!

So, as I’ve tried to suggest, there is a lot to the emotions that we run the gauntlet of, as goalkeepers. But to really succeed in ‘whatever weather’ good or bad (well, match wise, as a metaphorical analogy), we need to keep things in check and maintain a level headed approach. Keeping things balanced. We should be more like Jedi monks or something! ‘Emotional stability’ is what this is: the ability to be unfazed throughout the whole 70 minutes every weekend for the whole season. A hard task, but worth it, because if we don’t, we won’t play well!

Ultimately, you want to be able to manage your emotions so that things don’t affect the way you play in goal. Don’t let things get to you, don’t let them niggle away at you or cause you problems that can affect your game, instead focus on the positives, don’t get carried away and don’t think you’re not good enough! It’s in no way easy, but rise to the challenge and display your mental strength! Rise above the difficulties, and make sure your goalkeeping is reflected in your ability to cope with adversity.